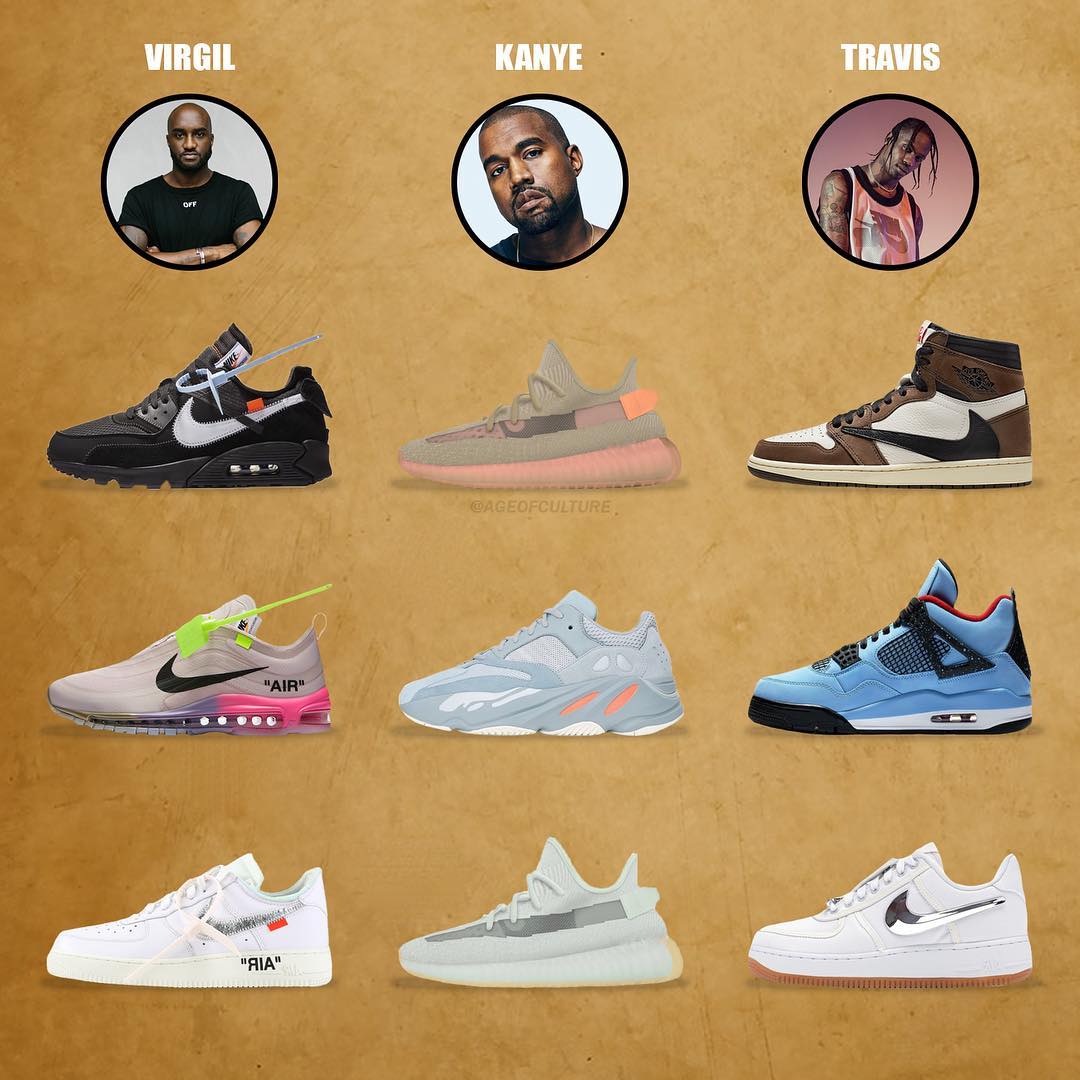 Travis Scott and Kanye West have been friends for a while now, with Travis helping to produce West’s Stellar album “Yeezus,” and being signed to his GOOD Music record label since twenty twelve. For the past few years, Scott has been making waves in the sneaker community, firstly with the Travis Scott Air Force one’s and more recently with the Cactus Jack Jordan one “Mocha.” With the recent struggles of the Yeezy line, Scott could potentially take over from Kanye, become the next sneaker designing sensation.

Kanye West has been making sneakers for over ten years now, originally making the Air Yeezy with Nike and a Luis Vuitton sneaker nicknamed the “Jaspar.” Both sneakers where critically acclaimed and since then, their resell has risen to well over four figures. He then went on to make the Air Yeezy two with such colorways as the Air Yeezy “Red October,” that is now going for four thousand and five hundred dollars on the sneaker reselling site StockX. Kanye then took his talents to Adidas making the successful Yeezy boost three hundred and fifty and seven hundred and fifty, that are known world-wide, as well as often being considered responsible for taking the Yeezy line from a popular line amongst sneakerheads, to the shoes everybody wanted but couldn’t get their hands on. Ye’s most recent work has been on the Yeezy seven hundred, five hundred, and three hundred and fifty version two, although the hype has decreased as of late. This can be mostly down to Kanye West wanting everyone to be able to get a pair by increasing the amount made, although it does show the buzz around Yeezy’s starting to faulter.

Both Kanye West and Travis Scott have had their shoes sell out in minutes but there are more differences between the two than you might expect. Firstly, although Scott’s shoes have been major successes, he has designed the colorways for already popular shoes such as the Air Jordan one or the Air force one, and when he released a version of the Air Jordan thirty threes, although they sold out, resale prices were only slightly above their retail thanks to the silhouette not carrying the same hype. There is a question to be asked whether this proves Scott still has a long way to go, as Kanye has famously popularized many shoes simply by wearing them, which has come to be known as the “Kanye effect”, whereas Travis Scott is still having to rely on classic models to get the sneakerheads excited.

As well as this, Kanye has kept people coming back for more for over a decade, thanks to multiple models that have been ahead of its time, even with all the controversies that surround him. Travis Scott may be popular now, but he has been in the sneaker game for less than three years so for him to even be comparable to Kanye West, he will need to keep up his shoes popularity for many years to come and will need to take risks along the way, just like Kanye had to do in his decision to go to Adidas to pursue his vision.

On the other hand, Travis is already on the right path to being the next sneaker designing sensation, with risks like flipping the swoosh on the Air Jordan one that paid off tenfold, and although he has only recently worked with shoes, his ability to stay in the public eye has been proven in his six years at the top of hip hop. If his music is anything to go by, Travis Scott can take risks and deliver critically acclaimed products that will hold up to the test of time, with his acute awareness of what people want. His music has also shown him however, to repeat formulas that work and do what he knows will sell, which the oversaturation of retro Jordan’s that no longer sell out prove, does not hold up as well in the sneaker business.

What is also going in Travis Scotts favor is his vastly safer public image, compared to Kanye west, with his social media being free from controversy unlike Kanye West, whose spontaneous monologues and troublesome tweets have hampered the amount of opportunities he has received. Travis Scott has been able to wear his sneakers on talk shows, like the Ellen show where he gifted Ellen a pair of his Air Force ones or in the twenty nineteen Superbowl halftime show, as previously mentioned.

Rumors have been going around that the Yeezy line is falling off, possibly leaving some large shoes (no pun intended,) to fill and Travis Scott could be the one to do it. Basketball shoes are decreasing in popularity and social media stars could be the new athletes for sneakers moving forward. A brand like Jordan is perfect for creating excitement around sneakers who also have a history of working with big names, for example Drake, whose shoes where a success, although they lacked the creativity Travis Scott’s shoes have brought. The fact of the matter is that Travis is unlike anything we have ever seen before, just like Kanye was when he was first discovered, and the first impressions of him are positive. His success in the future is not yet clear but with images surfacing of a Cactus Jack Jordan one low “Dark Mocha,” and the rumored Cactus Jack Air Jordan six, it may not be long until we find out.