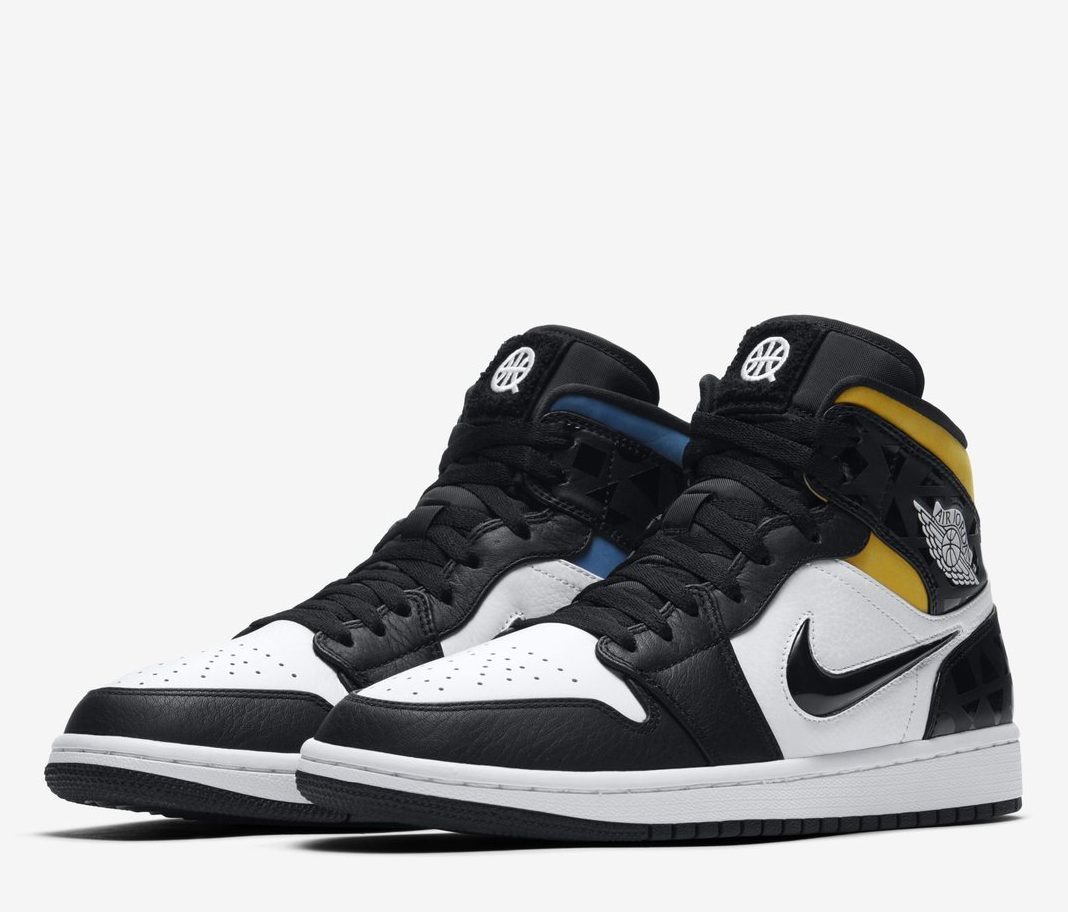 With the fifteenth Quai 54 event happening on the 22nd and the 23rd of June this year, Jordan Brand, who endorse the streetball event, have revealed the sneakers created especially for it.

Firstly, they have revealed an Air Jordan 1 Mid, an interesting choice considering that the mid cut version of the Air Jordan 1 does not receive as much excitement as the high cut version does. The Quai Air Jordan 1 Mid has a black and white leather upper, with the jump man on the tongue being replaced by the Quai 54 logo. The shoe also has separate black swooshes on the sides unlike the normal model that has the swooshes joined together at the back, and at the top of the shoe, the left sneaker has a yellow and green panel whereas the right pair has a red and blue panel. To finish off the shoe, the black leather on the back of the model has a pattern of triangles and squares that has been introduced to the tournament this year and is being used as the artwork for the event, featuring prominently in the Quai 54 2019 ad campaigns and on its website.

Jordan have also unveiled a special Quai 54 Air Jordan 8, which is the first time Jordan have made a special Quai 54 version of this model whereas there have been many Quai 54 Air Jordan 1s. The upper is covered in a black nubuck as well as a black mesh with the same pattern of triangles and squares on the back, only, on this model the pattern is in white, green, yellow, red and blue. The insole shares the same pattern however this sneaker will most likely cost more than the Air Jordan 1 Mid as it usually retails for $110 whereas the Air Jordan 8 usually retails for $200. After seeing the sneakers, many people are not convinced, as they believe the Air Jordan 1 Mid looks Tacky with the strange swooshes and the Air Jordan 8 is being criticized for being uninspiring with its basic changes and its simple idea .Both Sneakers are expected to release before the tournament starts on the 22nd of June, but they do not have a specific release date currently.

The Quai 54 street basketball event has been endorsed by Jordan for a while now and it is the only event of its kind endorsed by Jordan brand. Every year the two come together to make a collection for the annual event that contains shirts, jackets, shorts and more, but the core component of these collections are the shoes. They have released Quai 54 versions of the classics such as the Air Jordan 3 and Air Jordan 1, as well as friends and family versions for the people behind the two-day event that are more limited. They have also collaborated on some of their newer sneakers such as the Air Jordan 31 back in 2017 and the Westbrook why not 0.1 last year. These sneakers have had mixed receptions, with the friends and family 5s selling for around $10,000 for resale whereas the Quai 54 futures from last year’s collection have sat on shelves.

No matter what reception the sneakers get from the general public, the Parisians always love them. Basketball is huge in Paris, with many public courts all around the city, including a court in Pigalle, which is world famous for its bright colors and changing designs, so an event of this nature is perfect for Frances capital. Tickets start at $34 and the event takes place right in front of the famous Eiffel Tower. It is a yearly tournament of amateur and pro basketballers and it also contains a dunk contest to entertain the guests in between the games. It is also a place for Hip Hop, with its live performances of mostly local talents and dance battles going on throughout the weekend. Lastly, an attraction of the event is the fact Jordan sends out some of its biggest athletes to join in on the fun, such as Jimmy Butler or last year with Bismack Biyombo.

Jordan has a large presence in Paris with their Jordan store in Bastille and their collaborations with the local soccer team Paris Saint-Germain. Paris also contains sneaker stores like Opium Sneakers that has been visited twice by Tinker Hatfield himself and Shinzo Basketball, a two-story sneaker store that has rare Jordan’s on display on a conveyor belt. Jordan have built a cult following there which Quai 54 must be partially credited for and in return, Jordan Brand has been able to get Quai 54 from a popular streetball tournament in Paris to a household name. It has become a playable court in the popular basketball video game NBA Live 19 and celebrities such as Pharrell and Justin Timberlake have worn the apparel.

This year will be the 15th anniversary of this special event as it was started by Hammadoun Sidibe in 2002, and this year’s tournament is gearing up to be the best one yet. The website brags about 16 teams and 160 players, to play over the course of 2 days in 15 matches. The live performances will be from Niska, Davido and Koba La D and the Dunk Contest will star many famous professional dunkers including Guy Dupuy, a French dunker who won the show “The Dunk King,” was present at the Fiba 3v3 world cup in 2018, and is the current Quai 54 dunk contest reigning champion. With the main event less than a month away, the sneakers being revealed, and stands starting to sell out, the hype is starting to increase, but although the event is thriving, chances are only the locals will be rushing to get the sneakers this year.