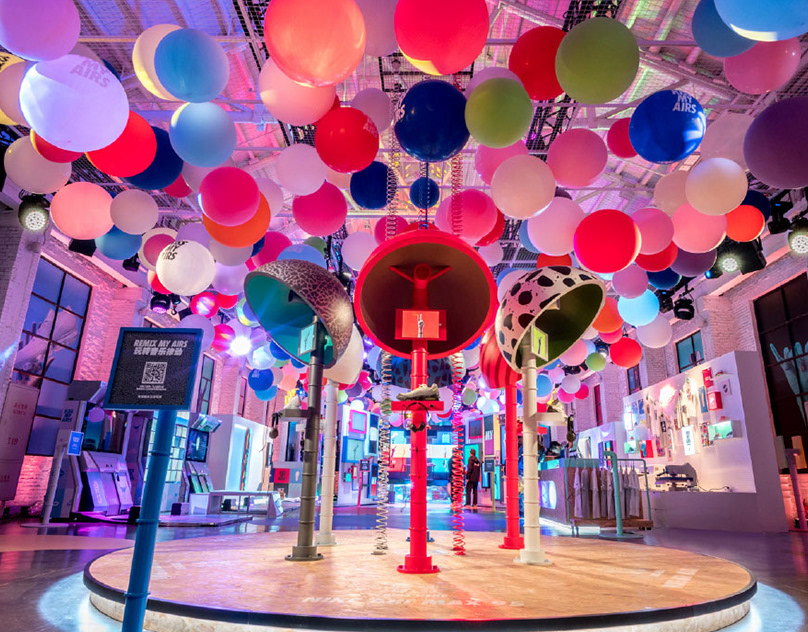 Celebrating 30 years of Air Max innovation.
For the third year running, we were asked by Nike to activate their Air Max Day campaign in China. For the 2017 event, we created two Shanghai-based brand activations that maximised consumer engagement like never before.
Over the week preceding Air Max Day, we took over Nike’s flagship store in Shanghai with a series of installations that allowed customers to interact with Air Max products. This included Remix My Airs, an app-connected customisation experience with personalisable t-shirts, jewellery and running soundtracks from local artists.
A super-sized crane machine game was installed in the front windows of the store, giving customers the chance to win exclusive Rosie Lee-designed Air Max memorabilia – while also offering street-level campaign visibility.
As the big day approached, the party continued at 800Show. A power station turned event space, it became home to Air Land, an interactive journey through Air innovation and key shoes from the Air Max line.
Trialling the VaporMax, Nike’s newest and lightest Air Max, was made more engaging than ever – thanks to our custom arcade dance machines that put users’ rhythm and reactions to the test.
During the weekend, local and international musicians took to the stage alongside talks from prominent designers, while the space also served as a running hub for local crews.