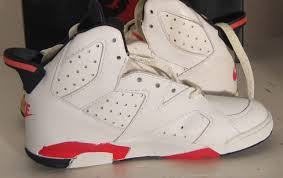 Guest post by Ian Collins – I don’t know how many of you saw Matt’s post about getting his first pair of Jordan’s, but after I read it, it sparked an idea or two or three.  As a sneaker head (or sole man if you prefer), I like hearing about other people’s stories of how they became entrenched in the world of sneakers or what their favorite pair of kicks are from back in the day (recent retro releases don’t count).  I think it’s a common interest that the sneaker culture all shares and can bond over. Kinda like two old dudes at the bar discussing who was better, Wilt or Russell (Russell, obviously).  They can strike up a conversation about sports, share their own experiences, and talk for hours, sometimes without even knowing each other prior.  Matt’s post got me reminiscing about my first pair of Air Jordan’s.  So here it is, my story about my first pair of J’s (all dates and information my not be 100, since it was a long ass time ago).

It was that time of year again, late August 1991, and time for back to school shopping,  I was going into 6th grade.  Gonna to be a big dog on the playground at Sanford Middle School.  I was never a super huge fan of back to school shopping since my mom and my older sister tried to give me advice on what to wear.  My mom had no clue what was “cool” (whose mom does at that age) and my sister was a tad preppy for my liking, and always tried to impart her sense of fashion on me (I have always been a tshirt and jeans type of guy). And as for my dad, lets just say he lacked patience for any of this.  The only reason I survived through this ordeal every year was because I got to get new sneakers.  My saving grace.  It’s why I went school shopping.

Side note: The best part about getting new kicks a week or wo before school; I convinced my mom at an early age that I needed to “break in” my new sneakers a week before school started, when in all honesty, I just wanted to show them off to all my neighborhood friends.  It worked out beautifully, especially since I would go home every night after wearing them and clean them.  Gotta keep ‘em fresh!

We would often get new sneakers at Bergeron Shoe’s in my hometown since it was convenient or a place like JC Penny’s, which surprisingly at the time had a decent selection of shoes. But this year, we couldn’t find anything I liked in the few places we went to, so we headed on over to Yankee Sports (I think that is what it was called).  It was kind of a low rent Olympia Sports at the time, but usually had killer deals on name brand clothing.  So we went in and I found two pairs that I fell in love with immediately.  The first pair were the black and red Nike Air Jordan 6’s.  Yeah, this was at a time when the Nike name was still directly affiliated with the Jordan brand.  And also this was before people got “creative” (re: lazy) and dubbed the term “Bred”.  Knowing that my dad was less than enthused to be spending money on something that wasn’t dire to my existence (little did he know about my love for sneakers, this was dire damn it!), I quickly put the pair down after seeing the price tag of like $80 or so.  (I think I was still able to squeeze into a kids size, so that kept the price down). So I went over to the next pair that caught my eyes, which surprisingly looked almost identical, minus actual air in the heel and a couple of other minor discrepancies.  They turned out to be the “Sky” Jordan’s (raise your hand if you remember these).  I think they were like $20 cheaper and more in the “I will reluctantly buy these for you but you remember that” price range rather than the actual Air Jordan’s, which were in the “Are you kidding me!?  Do you know that those cost more than my first car blah blah blah” price range.

We asked for my size in the “Sky” Jordan’s, and I was thrilled (and honestly, slightly scared of my dad’s reaction) when the guy came back saying they didn’t have it, but they had it in the “other ones” (which were in his hand, well done lord of the sneaker stock room).  I remember trying the J’s on, and they were heavenly.  I didn’t have a care in the world.  It was like that scene in “The Sound of Music” where the lady was singing and frolicking in the flowery fields and things were all glorious (yeah, I made a reference to a musical, and you all know what I’m talking about so don’t judge).  I was going home with these.  Then I remembered who was paying.  Uh oh.

So after taking an awkwardly long time avoiding eye contact and trying to summon up the courage, I looked at my father and asked the all important question, “Can I get these ones?” I don’t know if it was because it was the end of the day, or if my mom sweet talked him, but by some miracle there was a divine intervention of the sneaker gods, and my dad barely put up a fight before letting me get them (I think there may have been a “are you sure you aren’t a different size” and “are you sure you don’t have the other ones in his size” but that’s it, which is amazing really).  I promised that I would take care of them and keep them clean, and it’s a promise I kept.  I actually had them for a few years, even after growing out of them.  I was super proud of them and every once in a while a friend would ask what I did with “those Jordan’s you had a few years ago” and I would proudly show them off.  Not sure what ended up happening to them, but it began a run of rocking high-end sneakers and being known as that kid with the dope kicks.  And even though I am probably closer to seasoned veteran than a kid, I still keep em fresh.