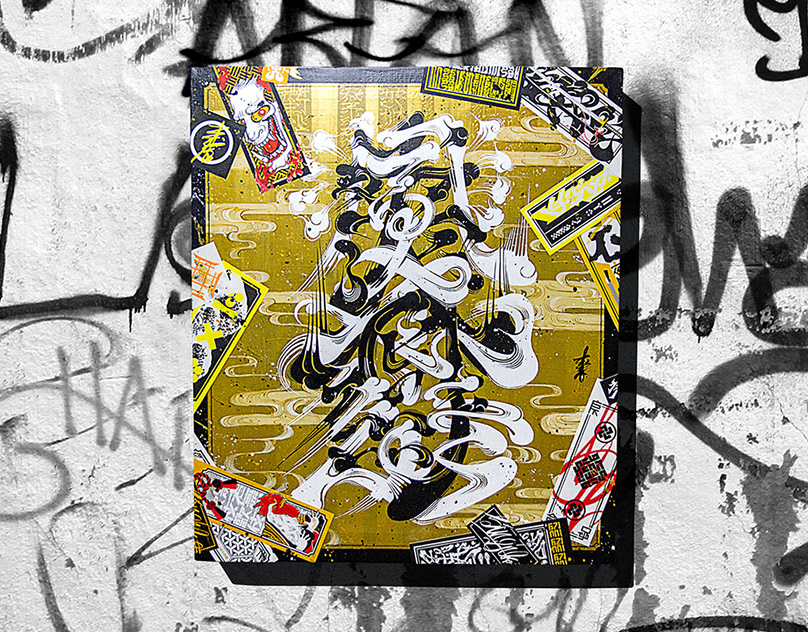 These works were created as a series exploring Chinese characters and street art.
One rule of writing is that a character only takes on its meaning after its last stroke has been drawn.
Any lines that violate this principle are only “lines” and are not recognized as having any meaning.
However, people also explore meaning while partially following this principle and still exploring combinations outside of its jurisdiction.
“The Line” series of works utilizes the forms of Chinese characters as “characters” while attempting to convey to the viewer a fluid sensory impression of the brush strokes beyond the characters themselves.

My preferred font is 'higemoji' (whiskered characters), said to have originated in the Edo period (1603-1868).
Increasing education at the time led to increased literacy, and vast development in calligraphy. Unique fonts developed in various settings, such as in plays, ‘misemono’ shows, ‘yose’ vaudeville theatres, and kabuki.
Higemoji was used in places such as firemen’s ‘hikeshibo’ poles and coats, pilgrims’ votive stickers, and street lanterns. It is created through certain methods for deforming characters, such as creating scratchy tails with a nearly dry brush, ‘whiskering’ vertical strokes into thorny shapes, or leaving 'moth-eaten' holes in the middle of a character.
Advertisement. Scroll to continue reading.

In Japan, there was a culture of posting “senja-fuda,” which are rectangular stickers bearing the user's name or nickname, on the gates or buildings of Shinto shrines and Buddhist temples as a sign of the visit.
The stickers that have been stuck on the surroundings of this piece were created based on this theme.
The graphics are a mixture of traditional elements, modern forms, and Western street culture.
All of the graphics have been printed on Japanese paper one color at a time using silkscreen printing.

The background of this piece is covered by an “aggregation of lines resembling letters,” which is one of the production concepts.
The kanji-like forms that are dyed deeply into the body are drawn freehand based on the muscle's movements as involuntarily as possible.