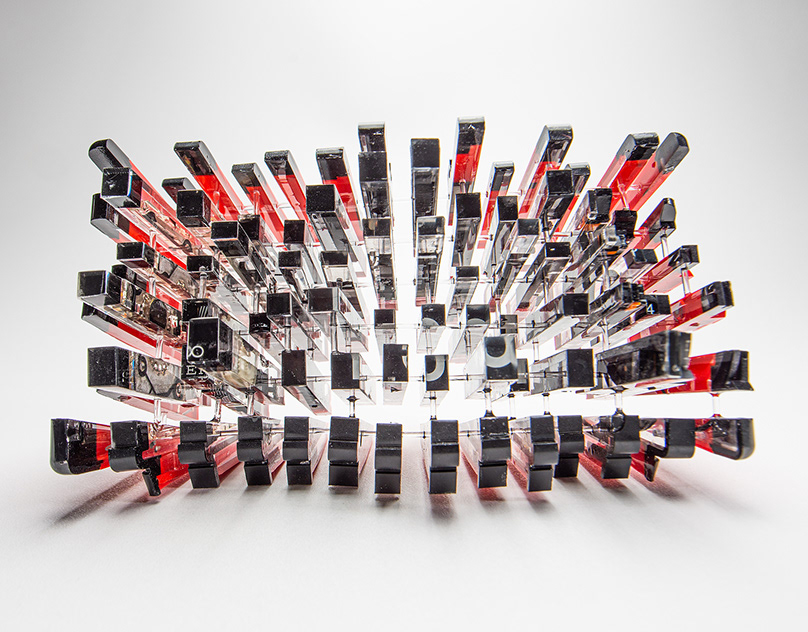 The Heisenberg Series
6 Objects
Aluminum, Leather, Resin
2021
Oefner`s latest series draws its inspiration from the world of quantum mechanics. The sculptures are based on Werner Heisenberg`s famous Uncertainty Principle. This theory states, that you can not measure two separate parameters of a particle simultaneously. You can either determine one parameter and ignore the other or vice versa, but you can never know both at once.
Oefner took this idea from the world of physics  and created an artistic equivalent of it. The sculptures are made of six different everyday objects: shoes, a clock, a tape recorder, a camera and a black box. The artist filled these with resin and carefully sliced them into hundreds of individual parts. He then rearranged the slices into a distorted new version of the object, that lets you see its inner workings.
Through this transformation, the objects have a peculiar effect on their observer: When you look at them from a distance, you can easily identify the object. However, if you start to get closer to observe the inside, the shape of the object starts to get distorted and vanishes completely. As an observer you are never able to look at the object as a whole and its inner workings simultaneously.  The more accurately we see one view, the less clearly we see the other. Your interaction with the sculpture ultimately determines its appearance.