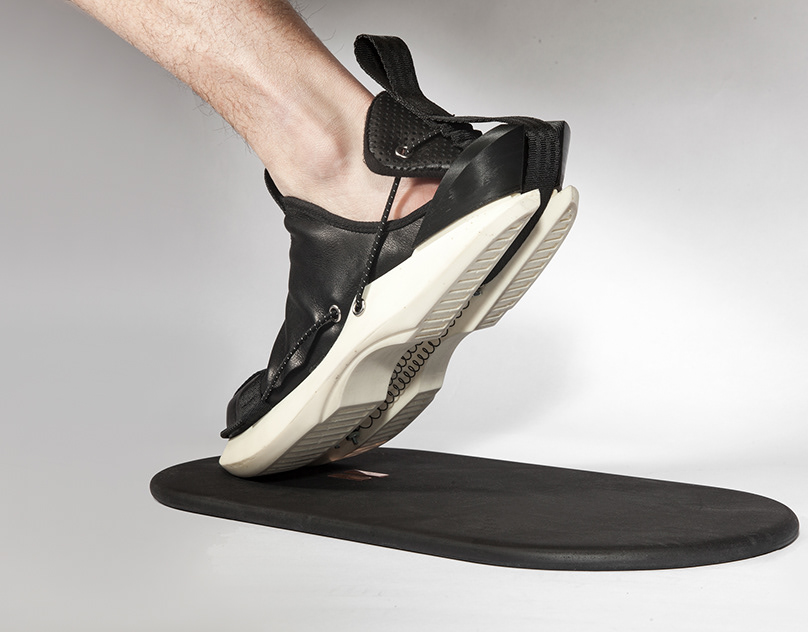 Intro
This project is an exploration on SMA–Shape Memory Alloy, composed with Titanium and Nickel atoms, often referred as muscle wire, or nitinol, flexinol, etc. It has the property of reshaping into its “remembered form” in certain thermo conditions. I tested 2 forms of SMA, one straight, one in coiled spring form. In regular room temperature, the can be bent into any shape, and the spring can be stretched. Once it reached the temperature of 70°C through any method, they would want to return to its shape (to be straight, to shrink, the spring will returned to its compressed form).

Without any doubt I tailored the project into the direction of shoes. As I was excited in the potential SMA could have in footwear, I began with researching related existing problems and issues that I can attempt to address with a solution.
The research started with transformable or convertible shoes, to self-lacing shoes, to adaptive shoes, and finally landed in the topic of fashion for people with disability, because its has lots of issues neglected and unsolved.

First one being extreme ugliness. Isn't it quite ironic and ridiculous that the left is what's available for people with the needs and the right is what the fashion market provides for hypebeasts?

Even with the most advanced smart and adaptive footwear on the market, there are still existing issues that are not fully considered. For example, to actually put the feet in, they assume people can easily touch their heels, or to stick their fingers into the shoe in order to slide the feet in. Even with Nike's Flyease, the velcro-zipper-elastic system still requires a certain level of hand, wrist, finger movement and dexterity, which could still be challenging for some people.
“Enclothed Cognition” is a term I discovered in my research, it refers to the systematic influence that clothes have on the wearer's psychological processes. Not being able to put on shoes by oneself and constantly realizing the fact that they dress “in a disabled look” is devastating on the user experience and self esteem.
The research yielded in 3 important insights, which are the cores to the problem, and guidelines to adhere to:
1.Accessible:
Putting on clothes is a problem that people with disability have to deal with everyday. Especially shoes are among the hardest to conquer. The shoes have to be ease to access, be easily put on and taken off independently by the users.
2.Smart:
Smart, innovative assistive system and feature needs to be applied to the shoe as a workaround to current fastening methods to aid people putting them on.
3.Fashionable:
One of the biggest problem on adaptive footwear on the current market–ugliness. Whats now available are usually bulky and bland in an unattractive way. All people equally deserve the freedom and choices to dress in style.
All these insights and thoughts urges me to design a shoe that's truly accessible, that truly have the ease to put on and take off independently and totally hand-free, and are truly designed to be fashionable.
Lots of the smart shoes focus to solve the tightening issue, which actually made me question the legitimacy of the solutions. indeed, self-closing is a right direction, because tightening the shoe is indeed the hardest step. But does it have to be the step that we invest all our smart devices and technology in? If we think about it in an opposite way, what if we employ a simple method(not even a mechanism) to tight the shoe, but design a system of smart device to open up the shoe?
Prototypes
V1

Some preliminary sketches to apply SMA spring for self-opening.
The first thing I thought of was Chelsea Boots, as it kind of applies the idea of “self closing”–having elastic material connect the front upper with the counter. The initial intention is to attach a collapsable external structure containing SMA spring, when activated by stepping onto a specialized door mat (conduct electricity to heat up SMA), would pull down the counter and open up space in the back so people can stick their foot in like a slipper (the easiest shoe to wear). When stepping out of the door mat the system is deactivated and elastics on the side pull the counter back up.

A test was done to mock up the materials' behavior under such circumstances. It's proved to be problematic.
1. it was hard to control the direction the foam wants to collapse in.
2.the insulation of the foam was too great so it was very hard for the spring to lose heat (which means its hard to stretch out).
V2

The concept was re-imagined in a different direction. The objective was still creating an opening in the back for accessibility, but the method was changed from squeezing the counter flat to hinging it. The SMA spring was placed inside of the sole and connected to the counter to pull it down.

A structural mock up was done directly on the last to test out the mechanism. A few problems observed:
1. The counter structure was too soft, lots of pull force was countered by internal friction in the counter.
2. The elastic was fixed in the position where the upper will go. With such strong counterforce it will deform the upper.
3. The wider the bottom part of the counter that hinges, the more force it requires to pull. Hinges want to be 2D.
4. The geometry was not the most efficient, and the SMAs need a more direct counterforce to stretch it back.

Reducing the width of hinging point and enclose a bent styrene into the structure.
V3

Since the last model also proved that pivoting the pull direction toward the back instead of straight down makes the mechanism more efficient, so in the next version, a structure was added to the counter/heel area to bring the turning point of the force toward the back. The position to fix the elastic also changed from the middle of the upper to the side of the sole for more sturdiness. The folding counter was changed to a diamond shape to make hinging easier.

A prototype was printed to address issues from the last model and to test out the geometry of the entire mechanism. It was made to be adjustable so every connection and attachment could be tweaked to to find out their optimal positions. Also, dump springs are installed directly against the SMAs for a direct counterforce.
After all geometries and parts are confirmed, it was time to design the final prototype.
Final Prototype Drawing

Starting with manually modeling my last in Rhino, a fitter was printed to test out the CAD last. The sole was then modeled, printed, glued, primed, sanded and finished. After completion of the sole positive a 2-part silicone mold was made with it. A rubber sole (smooth on PMC-780) was then casted with the mold. 3 upper fitter was made to test out sizes to ensure foot slips in & out easily yet held securely when closed. Counter contains a layer of perforated leather, a layer of suede to back it up, a layer of styrene, a layer of foam and eventually lined with a layer of neoprene. Upper was sewn and lasted, stiffeners was used all around upper to ensure it won't be distorted by the pull of elastic.
Pics of Final Prototype

Ideally in the actual product, the system is powered by wireless charging coils, but for demonstration purpose, current is conducted through the copper plates into the system on the shoe.

The webbings was sewn in a way to provide a channels just above the sole for the elastic to go through. Since the elastic travels all the way around the upper reinforced with stiffeners, then directly through the sole, it has lots of space to stretch, and ensure a secure yet flexible system.

Electricity is charged through the stationary points placed right behind the ball of the foot. The metal end clip on the webbing conducts electricity between the 2 springs.

In the final prototype, the dump springs are placed underneath the spring in an even deeper channel. By applying a deeper channel, the webbing is suspended by the tension between the springs without touching the sole, minimizing the friction to the maximum.

In this article:and…, the, was