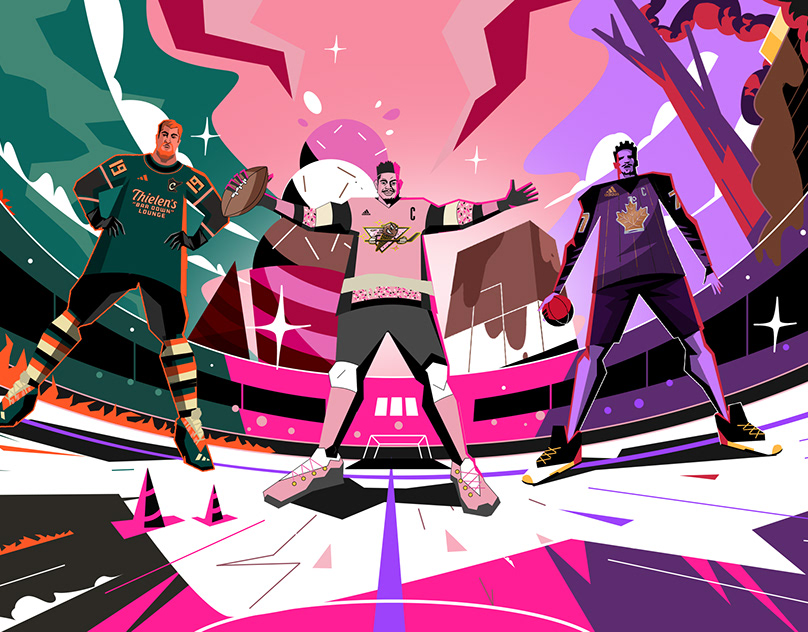 EA NHL 2020 & Adidas
When EA called us to help with this campaign, it immediately stood out as an exercise in first making something rad, but also in simplifying a complex brand problem into something understandable.
With the NBA and NFL, there is a certain amount of cultural cool that the NHL has but hasn't displayed as effectively yet. To remedy that, NHL 2020 in collaboration with Adidas created 3 clothing lines with 3 elite athletes in the NBA and NFL that is NHL 2020 hockey-themed, conceptually as fans but tied to their individual accolades as athletes. Confused yet?
This is where design and animation really helped solve this campaign in a cool and effective way. Showing off the cool streetwear-inspired designs of each athlete, the story behind each one, the athletes themselves and of course the NHL our story for each and all of them together was simple.
The athletes dressed in the clothes they designed, use their signature athletic prowess whether it is speed, fancy moves, or killer jump shots to race and crash land into an NHL 2020 rink as the ultimate fan. Illustration and animation were the perfect technique to get them to do that in a larger than life way that showed off both the clothes, their likeliness and their killer moves to get us there.
So how does something like this come together?

Concept Art
Our first task was exploring the look and feel of this campaign aesthetically. Because it was a video game campaign in a very competitive market, we chose a more graphic approach to stand out from the competition. This also helped both match and tie the different clothing line designs together cohesively.

Storyboards
In our initial pitch, narratively we knew we needed to start with video game footage, transition to animation, and end in an NHL rink. The storyboarding phase not only helped us figure out everything in between, but it was a helpful roadmap and exploration to show the Adidas gear up close for product placement, show the athletes clearly and show off their cool athletic ability to get them to the rink.
Advertisement. Scroll to continue reading.

General Styleframes
With concept art the client liked, and a storyboard that made sense narratively, this phase was simply a stress test to see if the look would hold up in different poses and angles. Luckily it did.

Typography Look Development
It was bound to happen, but the ol' 'So can we add title cards?' note came up. Because we are psychic we had a feeling it might, and built both space around our animations and a look that would allow for the text to not only not overpower but work pretty harmoniously with the illustration style in a way that deliberately felt tied together as one idea and look.

Initial Character Animation Look Development
From the start, we knew we would cel animate most of the characters in each video. But there were more static moments particularly at the end of each video we wanted to explore just to figure out the tendencies of each character. This was one of those explorations showing just what a little movement can do to help even in the less active moments. It still adds quite a ton we felt like.

Motion Tests & Animation Exploration
When approaching it from a cel animation perspective, the first pass is simply sketched drawings in motion to confirm if we are in the right space with the right movement at the right timing which is what these 3 tests were. This helped give us and the client a decent roadmap of where to head. At the same time, our 2d and after effects animation team started building backgrounds and effects to combine with these character animations as a way to marry everything together in a less time-intensive way.

In this article:and…, the, this