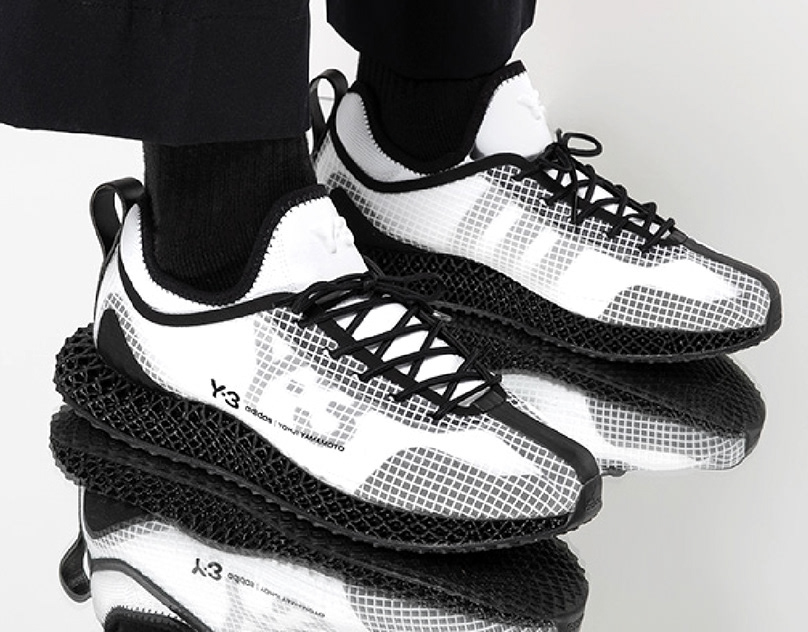 ADIDAS Y-3 – Runner 4D io
______________________________________________________
“adidas‘ Yohji Yamamoto-helmed division Y-3 has played with 4D light, oxygen and liquid resin fuel technology for a number of years now, releasing sought-after pairs such as the inaugural RUNNER 4D and more.
Now, the technical Y-3 label has gone back to the drawing board and has released an all-new sneaker, dubbed
the
RUNNER 4D io
The Y-3 RUNNER 4D IO is available in “Footwear White/Black” and “Black/Trace Khaki,” with both looking as technical and futuristic as each other. The white pair shows off the shoe’s details best — namely its transparent mesh outer layer that acts as a window to the inside of the shoe, where you’ll find a detachable Primeknit sock branded with Y-3 logos and finished with contrasting colors to help split up the shoe’s components.
A set of Three Stripes appear on the medial side of the Primeknit inner sock, while “Y-3 adidas | YOHJI YAMAMOTO” branding has been added to the outer mesh lining. For the black pair, “Trace Khaki” has been used to detail elements including the outsole that lines the full-length black-tinted 4D midsole, and the tongue, heel, toe detailing, and heel cup.”
Hypebeast
“Through experimentation and expression, Y-3 transforms a running style for the new era. The transparent upper of the Runner 4D IO shoes reveals the adidas Primeknit sock underneath, detachable with a hook-and-loop construction.
An innovative fusion of light, oxygen and liquid resin fuel the midsole, delivering precisely-tuned cushioning.
Lace closure Ripstop upper includes two interchangeable adidas Primeknit socks. Neoprene tongue lining adidas 4D midsole Continental™ Rubber outsole for extraordinary traction in wet and dry conditions.”
WrongWeather
New upper on existing 4D midsole
development : Oury Hermes & Elisa Amerio
product manager : Lukas Ruprecht
midsole design : adidas Running / adidas Future / Carbon4D
–
2019

Thank you for reading !
Advertisement. Scroll to continue reading.

In this article:and…, for, the