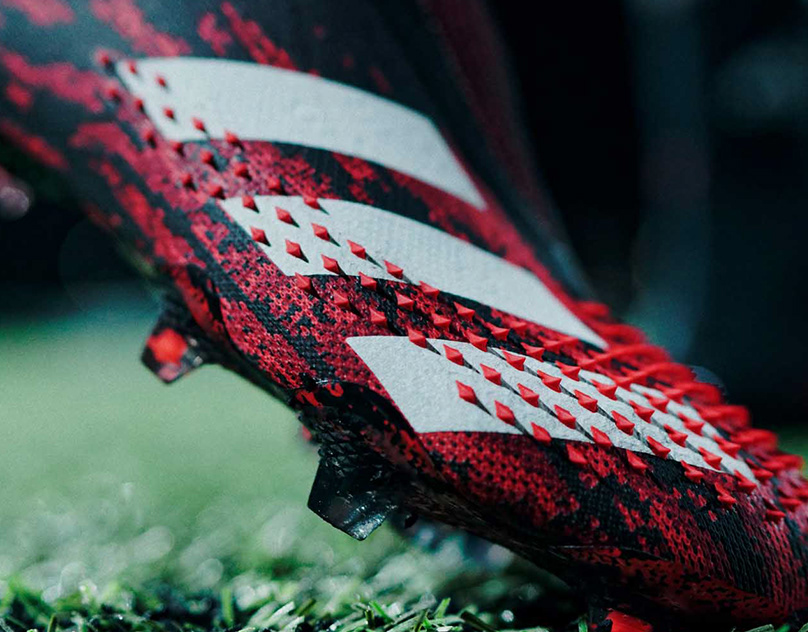 SS20 /// Adidas Football ​​​​​​​​​​​​​​​​​​​​
“FOR 2020 WE WANTED TO UNLEASH PREDATOR TO A NEW GENERATION. WE KNEW THAT WE HAD TO CREATE SOMETHING COMPLETELY DIFFERENT, GO BEYOND EVOLUTION AND DELIVER A NEW INNOVATION, SOMETHING THAT WOULD INTIMIDATE OPPONENTS. DEMONSKIN IS AT THE HEART OF THIS”
Predator 20 Mutator with DEMONSKIN, an all-new technology developed to enhance grip on the ball and maximize control.
DEMONSKIN is a new breakthrough technology for adidas Football, made up of a textured spike layer on the Predator 20 Mutator upper. Informed by years of data-based research and testing, DEMONSKIN is the result of a computer algorithm being used to create an entirely new interface between boot and ball. DEMONSKIN spikes have been deliberately crafted to wrap the front and side of the boot in a formation that aligns to key contact points with the ball, combining to give players enhanced control and touch on the ball, whilst also promoting spin when striking.
Since its inception, the design of Predator has been informed by nature’s most dangerous creatures – symbolic of the powerful and dynamic tendencies that the boot instils in the wearer to give them an advantage over opponents. Taking cues from the extremes of nature, Predator 20 Mutator sees the boot’s iconic shape re-imagined further, with a striking silhouette centering on a high collar and low-cut front creating a sharp and streamlined design mutation.
Always evolving, the new Predator 20 Mutator has been designed with maximum movement in mind. The silo features new outsole enhancing control zones, whilst the addition of high-performance polyamide-injected layers help stabilize movement further. The boot offers a two-plate stud configuration that reduces weight and allows a 360 design where the upper material wraps under the foot. This construction, together with the Sockfit collar that locks down and adjusts to the unique contours of the wearer’s foot, ensures anatomical fit for support. The inclusion of Hybrid studs further amplifies the boot’s level of rotation and traction.​​​​​​​
​
Creative direction: S.Handy, B.Herath & D.Surace
​​​​​​​​​​​​​​
Design Team: A.Mazoyer, M.Taylor, M.Scharnagl, J.Nagra & M.Vernic
Development: M.Love, J.Seabourne, J.Rohrberg & B.Thompsett
Product Marketing: G.Saint-André & T.Armfield
​​​​​​​
​​​​​​​

During the launch of the Predator 20 Mutator in London, we immersed a group of Media through the story of Predator and the design journey of the new boot.

In this article:and…, new, the