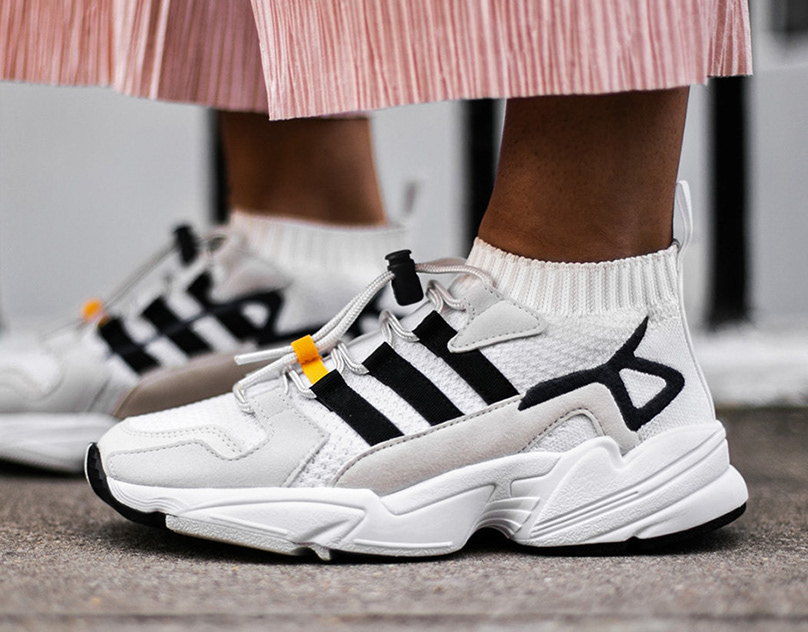 ADIDAS CONSORTIUM FALCON _
New upper on existing midsole
retail price : 130€
development : Manuel Suarez Prat
product manager : George Griffin
–
“adidas Consortium’s “Workshop” project is aimed at exploring the esteemed history of adidas Originals, letting designers and creatives who are not associated with the Three Stripes’ in-house design team put a unique spin on some of the German brand’s most classic silhouettes. After the first two Workshop collections dropped at the tail end of 2017 and the beginning of 2018, the project is returning again with two re-worked iterations of heritage silhouettes: the adidas Falcon and the adidas SS2G.
The classic DNA of both shoes is clearly intact on the revamped designs, but modern-day touches on each gives them a pop of unique flair: the re-worked Falcon features a high sock style collar and a Primeknit upper, while the usual lace system is replaced by a minimal toggle variation. The modernized SS2g—already a redone version of the classic adidas Superstar—features the same toggle lacing system, a stripped-back design where suede overlays and a neoprene tongue cover an off-white mesh upper while bright yellow stitching arrives around the toe cap. Both arrive in a clean combination of white, navy blue, and yellow, and are set to release at authorized Three Stripes stockists August 8th. ” SneakerNews
2017

In this article:adidas, and…, the