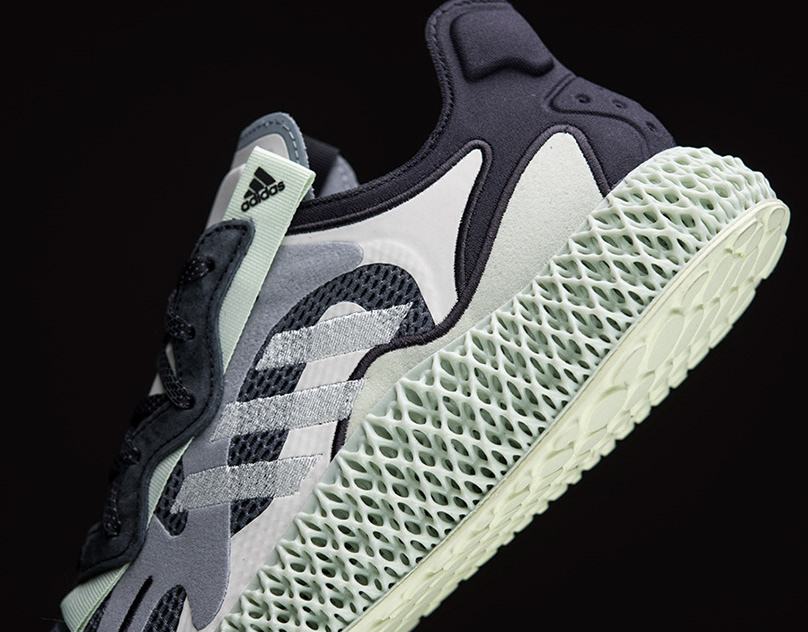 ADIDAS CONSORTIUM 4D V2
______________________________________________________
” Adidas Consortium is back with a second take on the Consortium Runner 4D, the aptly named Consortium Runner 4D V2. Much like its predecessor, it presents adidas‘s latest tech in a lifestyle-focused package — but it separates itself vastly with its new upper, which adds plenty of fresh flair.
Debuting in a “College Navy” colorway that’s decidedly more grey than cerulean, the Consortium Runner V2 4D presents a significant number of layered details, all dressed in soft grey and light mint green hues. Abstract-shaped synthetic overlays stretch across the upper, and are encircled by embroidered Three Stripe graphics on the midfoot plus a dark grey heel. The asymmetrical lace system is secured by grey suede eyestays, and a green fabric strip runs the length of the throat while a small Consortium tag appearing on the tongue’s other side.
If you remove the insole, you’ll also see printed graphics that provide “tech specs” and a translucent window that enables you to look at the 4D material from the top down. Of course, the entire Futurecraft midsole is constructed of a latticed structure dressed in signature “Aero Green” — one that’s assembled via a high-tech process dubbed “Digital Light Synthesis.” A green Continental rubber outsole completes the look.” HypeBeast
Upper only
creative direction : Aurelien Longo
development : Manuel Suarez Prat
product manager : Maximillian Bente
–
2018

After the first series of adidas Consortium 4D’s in 2018 with Invincible_inc / Footpatrol_ldn / Sneakersnstuff / Kith and finally DanielArsham , the team is back with the V2 introducing the new 4D midsole lattice developed by Adidas Running & Carbon – This time instead of minimising the upper, we decided to take the other road and over-construct it, adding panels and embroideries, overlaying each others.

One could think sketching is the only way to design shoes. In this case this was not how the project started.
Instead, we decided to change the method and draw lines directly on the flat shell-pattern (see above). In this way we could design the shoe same as we would make a painting, working on asymmetry, balance and harmony, mixing curvy and straight lines together, forgetting about any sense or logic of construction.

To continue the journey of Consortium4D, we decided to replicate the original idea of having a clear / see-though strobel panel in order to see the top side of the 4D printed midsole.
We added a frame around it on which we printed the five steps of 4D printing, from data-collection to actually printing. The purpose there was to educate the consumer about Carbon midsole and on the way it is made.
Advertisement. Scroll to continue reading.

In this article:and…, Consortium, the